Pret A Diner - 'Italians Do It Better', if by better you mean take the piss

My mate Dave was round yesterday for lunch, and I made spaghetti with semi dried tomatoes, basil, parmesan and a little bit of good olive oil.  Totally simple, delicious and cheap.  He wanted a suggestion of where to take his girlfriend for a special meal.  We discussed options and I came to the conclusion that the best posh meals I've had have been expensive but great value, i.e. set lunch at Le Gavroche, which is £45 but you get a bottle of wine, and it's amazing.  Also Mr. Underhills - which is maybe £65 but it's done with so much love and hard work.

Cut to yesterday evening, when another friend was taking me out for a special celebration to Pret A Diner, which is a collaboration of art, food and trendiness / pretension - which is temporarily in Mayfair for a month or so.  But you're not allowed to call it a pop up, because it's 'A Dining Experience'....La di da.

In essence, £75 for an Italian dinner.  But dinner doesn't include pudding.  (Well then it's not dinner I'm afraid.)  And also if you want beef instead of the choice of crayfish or lamb, that'll be a £13 supplement.  Oh.  And if you'd like fizzy water, that'll be £8.50 for a bottle, plus service, of course.  (Oh, and if there had been live performance, they'd have added an extra £8 cover charge, just because.  You know.  They can.)

By the time we'd had the cheapest bottle of wine on the menu, the whole thing was over £200 - with no pudding, because if you think I'm paying another £9 for a cannolo, when I am a cannoli affocionado with very high standards, then you are wrong.  I'm sorry but that's not 'A Dining Experience' - that's taking the piss.

What do you get for the money then?  Well...you start with 2 little squares of focaccia with tomato on top (very nice), 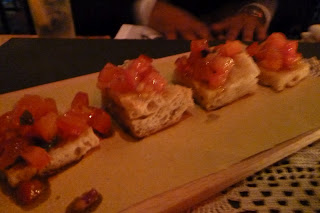 a mini tuna burger (fine, though it's not the mid-90s) 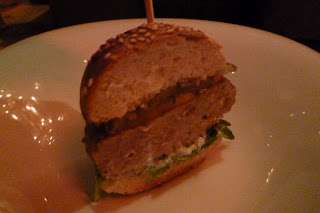 or, on the alternative menu (created by a chef whose surname is Craparo, so I don't need to make a joke at this point but feel free to insert your own) - the choice of a different mini tuna burger.  This mini tuna burger was the size of 2 x 50p coins (ironic, when you think about it) and was served with some messed up lemonade with an oyster in it. 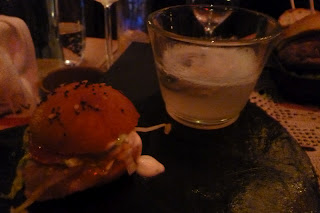 Then there was a pasta with mullet and olives that wasn't anywhere near as delicious as the pasta I'd made for lunch, or a gnocchi that tasted of salt and nowt else (and I say that as a dear fan of salt, except in this instance.)

Then I had very good lamb, and my mate had very good beef (though not £60 good, which I guess is how the pricing would break down.) 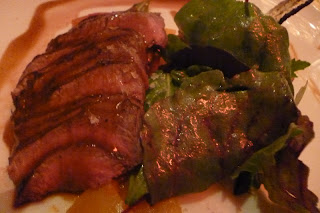 And sure, there's a DJ and it all feels a little bit Zoolander meets a mid-90s-WAG-show-home 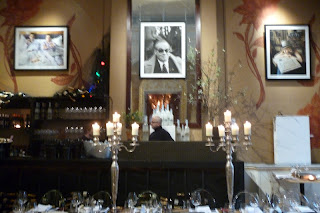 and you get to eat in a glitzy room 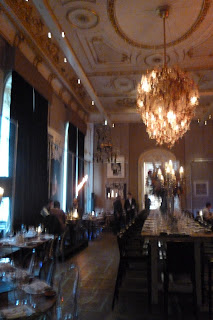 that's been styled as an indoor basketball court with a neon hoop: 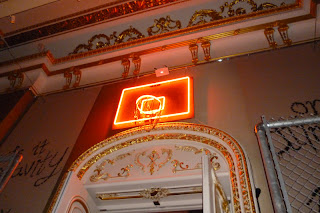 So if a neon hoop is your thing darling, then you'll enjoy it immensely.  But for me that's not enough to justify these prices for this food.

I popped in to the Pret A Diner at The Minotaur last autumn, and while I didn't eat there, at least the venue leant it a massive sense of spectacle and originality.  But this? It's nothing special, in fact the food is pretty average, and the prices leave a very bad neon taste in one's mouth.
Posted by Stella Newman at 11:28

Email ThisBlogThis!Share to TwitterShare to FacebookShare to Pinterest
Labels: Pret A Diner